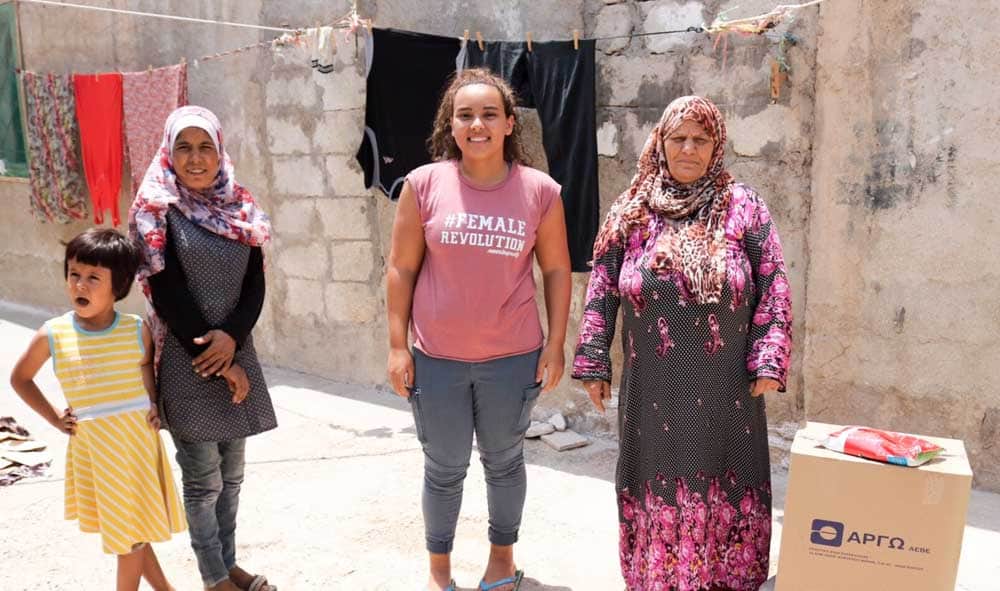 As my junior year of high school was coming to an end, I was growing increasingly more excited to head to California and spend the summer surfing with friends, discovering the most beautiful beaches in the United States and cruising down the Pacific Highway.

However, after one Netflix documentary, my plans- and thoughts- completely changed.

A heart-wrenching film on Syria’s seemingly endless civil war had opened my eyes to the refugee crisis and made my fun-filled vacation seem selfish and quite ridiculous while such a tragic event was occurring on the other side of the world.

I knew I had to do everything in my power to help, and as a writer, I wanted to share the stories of the people who were deemed voiceless to the world.

I dove into researching every aspect of the refugee crisis that I could but soon grew frustrated and discouraged, as I couldn’t find an organization that allowed volunteers under the age of 21 with no prior experience to help out.

With persistence, I discovered The Syria Fund, a non-profit organization helping to build schools in Northern Jordan so that Syrian kids can continue their educations during displacement.

After a meeting with the founder, extensive planning, and successfully persuading my parents, I was ready to head into the Middle East and meet the incredible individuals who would forever inspire me.

The day I visited the school dawned crisp and stiflingly hot, typical for summer in Jordan. The familiar smell of falafel and exhaust swirled around me as shopkeepers near our hotel began setting up for the day.

I anticipated what was to come, yet I was anxious at the prospect of meeting so many strangers.

With my family in tow, I met our guide for the day. Owais was a kind, dedicated teacher and coordinator at The Syria Fund, who constantly worked to support refugees. As we drove away from the bustling and modern capital city of Amman, there were less and less cars on the highway.

The frequent border signs and roar of Air Force planes were a startling reminder that Syria was just a few kilometres away.

I saw Azraq Refugee camp from my window, and my heart dropped. Seeing the thousands of white cabins in the form of makeshift homes right in front of me was nothing like seeing them on TV.

When you see refugee camps on the news, you are so sheltered and far that you don’t give them another thought. But this was reality. I was witnessing a place of lost dreams and broken families. 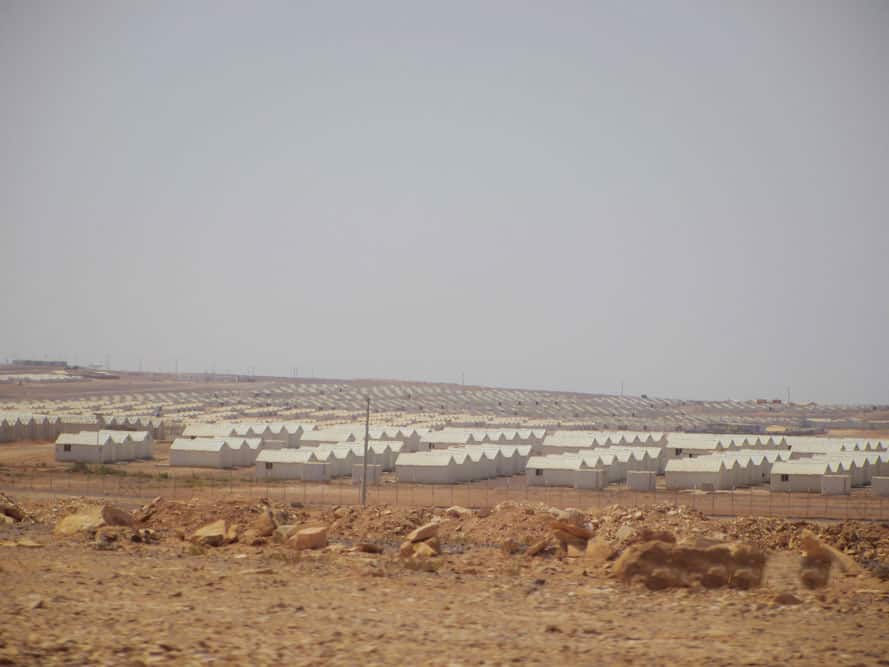 Not long after, we pulled up at the school. It was a cute place of multiple caravans with inspirational phrases painted on them that served as classrooms.

From the moment we arrived, I had kids running up to me and hugging and kissing my cheeks. They were so excited to see us!

I learned that most of the kids were from Homs or Idlib, and had crossed the Jordanian border when it was still possible. The border was closed now.

I asked them how their lives were before the war, and they nostalgically answered, “amazing”. Their cheeky smiles portrayed typical childhood innocence, yet their eyes held immeasurable secrets, and a wisdom beyond their years. They all told me they wanted to go back home when the war was over. I smiled because I knew that when they did, they’d be the ones to rebuild Syria. 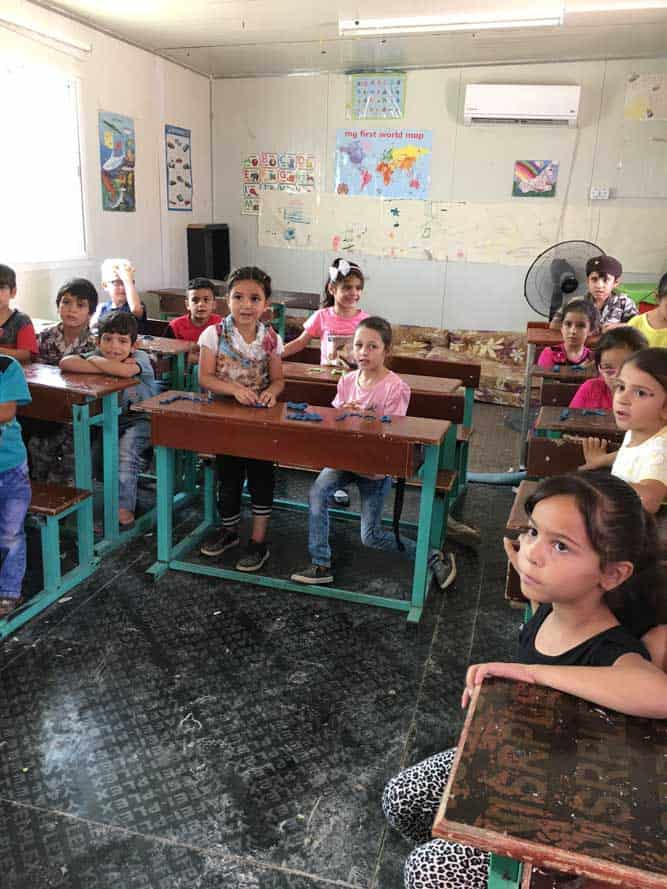 The brilliant kids I met have changed me more than I could ever change them, and have taught me that love is boundless and stronger than any hate.

They shared their stories with me, which brought tears to my eyes. Some of them had witnessed the anguish of refugee camps, many had watched family members die and all were victims of a terrible war.

Eleven-year-old Reem, the outgoing, natural-born leader who eagerly showed me around and practised her English with me, taught me to be fearless.

Thirteen-year-old Amjad, who always had a smile on his face despite having witnessed more than any child ever should, taught me to always be hopeful.

Fourteen-year-old sweet, shy Asma told me through tears that she suffered psychological trauma and had feared planes from the moment she witnessed her uncle die in an airstrike. She taught me that war devastates completely.

My time in Jordan has proven to me that regardless of politics, we are all humans capable of love and acceptance, and are responsible for helping one another. I aspire to write my second book about the Syrian civil war, but more importantly, how hope and resilience remain prevalent through the people.

Many organizations are working hard to better the lives of refugees, but unfortunately, not enough is being done to support them. There are millions of children still stuck in the conflict zones and over 6 million of those who have managed to escape are still not in school. 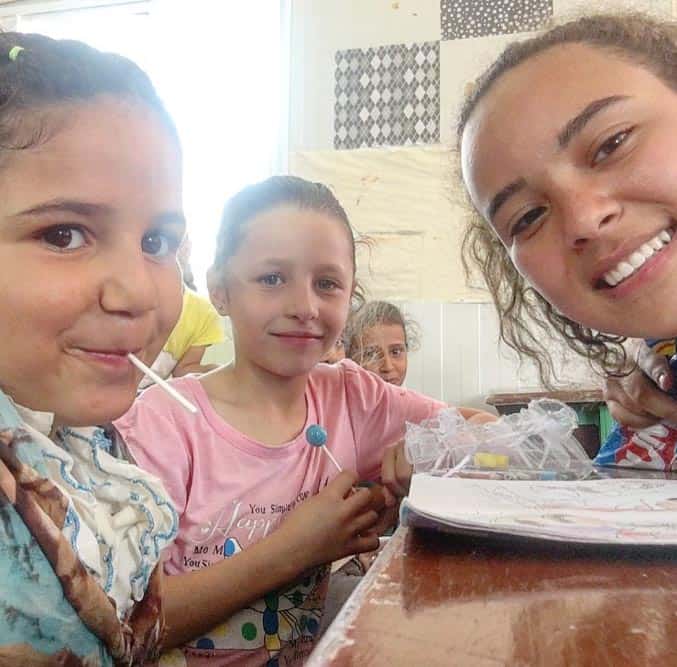 If we don’t do anything about it, future history books will tell of the generation that remained silent during the biggest humanitarian crisis of the 21st century. It is the compassion of people who take action against injustice who make all the difference.

How YOU can create change

I’ve compiled a brief list of how you can help refugees below. I hope you decide to join the movement, and that your experiences helping refugees will change your life for the better, as it has mine.

I have a fundraiser going on where any help would be much appreciated. 100% of profits go directly to the non-profit organization, The Syria Fund. So far, nearly $1,000 has been raised. While I was in Jordan, I watched my donations at work and personally distributed supplies to families. They were beyond grateful, and their hugs and smiles made me realize how crucial donating really is. Any amount helps and you can donate from any country. The money donated supplies refugee families with food, hygiene kits, school supplies and helps hire teachers.

The fundraiser can be found here

If you are headed to Jordan, Lebanon or Greece next, there are many ways you can personally volunteer with refugees in camps or community centres. Greece is the easiest place to volunteer abroad because laws for foreign volunteers aren’t as strict and there are various ways to help out. Just be sure to do adequate research, contact a reputable organization and plan everything out ahead of time. You can also volunteer at home. If you are in the United States or Canada, there are most likely some resettlement agencies near you that provide the opportunity to help refugees find jobs and integrate into their new environment.

When you hear people saying hurtful or negative things about refugees, correct them and let them know that refugees are people just like us. Breaking down stereotypes leads to a more accepting society. 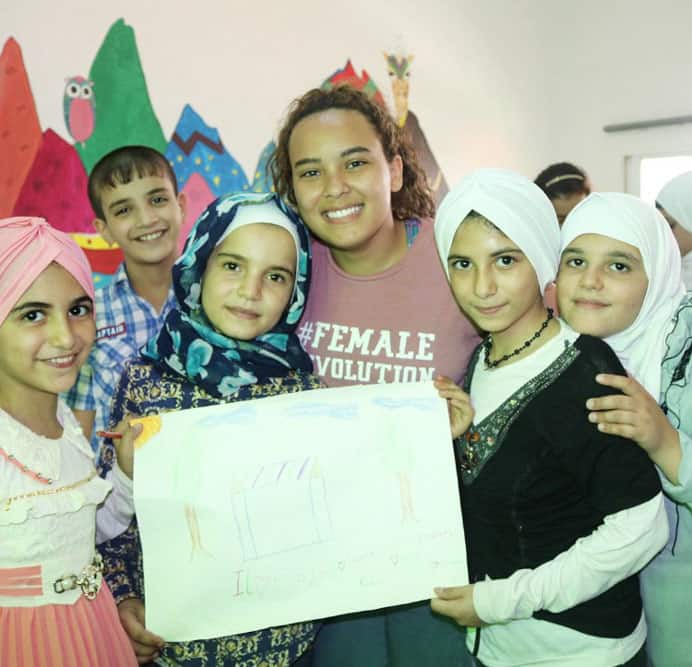 Yasmine is a humanitarian, advocate for human and animal rights, public speaker and world traveler. She wrote her first book at 8 years and has helped create change in the world through such adventures as raising over $1,000 to aid education for refugee children in Northern Jordan.  And all this before she has turned 18! You can follow Yasmine’s story over on her blog or Instagram account.

DO YOU HAVE AN INSPIRATIONAL STORY? WE LOVE SHARING AMAZING STORIES LIKE FRAN’S TO INSPIRE OTHERS TO MAKE A DIFFERENCE WHILE TRAVELLING. GET IN TOUCH TO SHARE YOURS AND FEATURE IN OUR MERAKI TRAVEL STORIES.