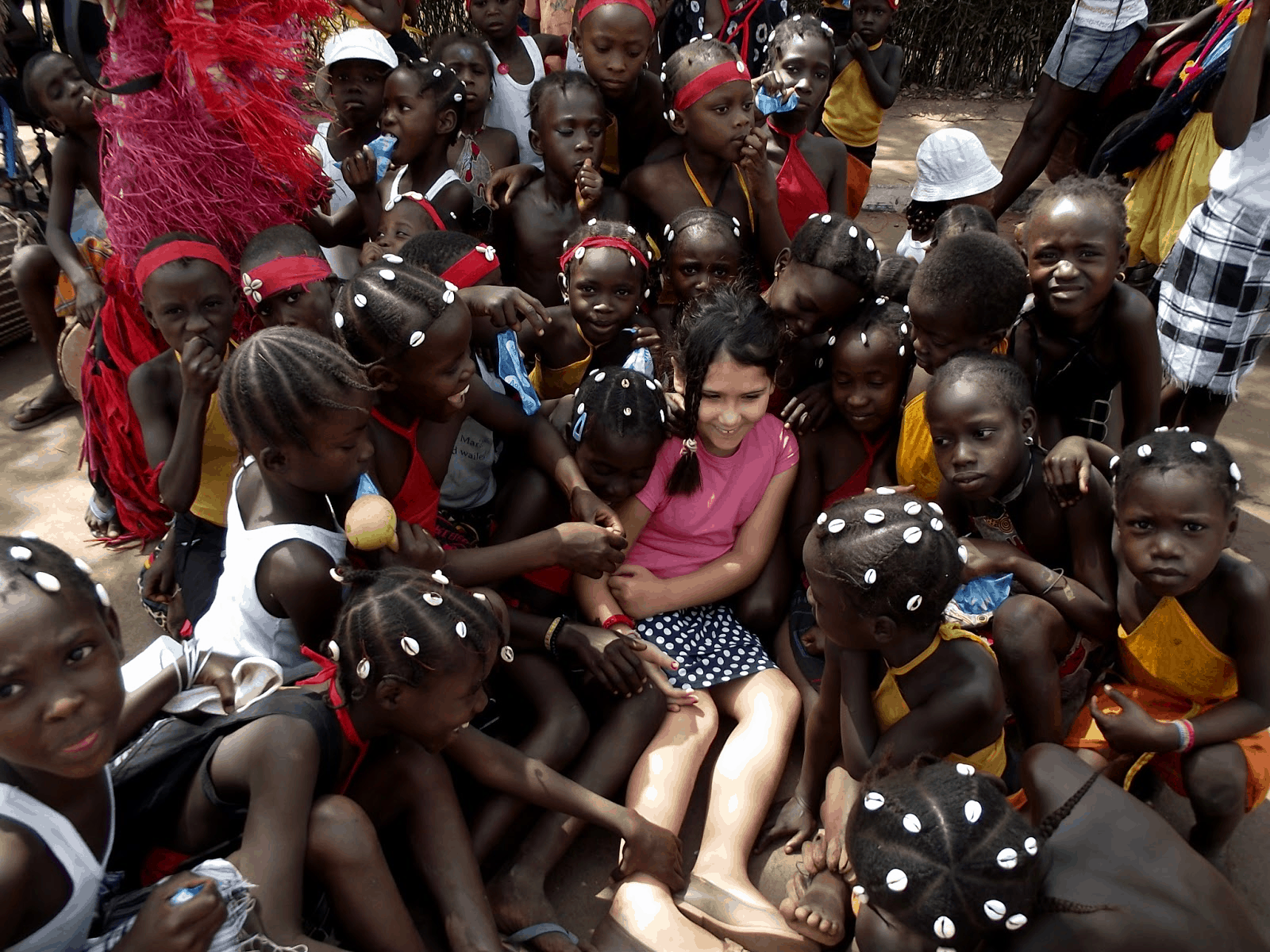 When Sónia got in touch wanting to share hers and Francisca’s story with us I knew it would be perfect for Meraki Inspiration.  I hope that her bravery and amazing adventures inspire you to explore, learn and take those big leaps of faith in your own life.

I was becoming a single mother, and a purist, because I took it all alone from moment zero. No stresses, no dilemmas or dramas, I was a mother.

It was all I had to know and that was enough. I was happy, very happy.

Never looking back. Not even to the fact that I had given up a career, that at the time, looked quite promising. Or having to give up many opportunities that do not appear often during our lives.

Consciously, I had decided to opt for a dream, paying the price of having to give up another.

At the time, with the support of my family, I owned it, I owned it all. Free from prejudice or false modesty where being a single mother would only be just a small detail.

When I first saw her, my daughter, in my arms, I felt so full, so complete and as I watched over my baby girl I felt that for each other, we were enough.

Being A Single Mother

After studying for four years in the United Kingdom, and having been raised by liberal parents I was not the typical single mother. Maybe sometimes I may have been forced to be a bit.

However, I did not want to be associated with some single mothers who spend their entire lives licking their own wounds while forgetting their children. Maybe I was being too biased but it was what I felt then, and pretty much, what I feel now.

Acting as victims take the power away from us and that does not help single mothers at all in any way. If anything, it makes us even more vulnerable by minimizing our capability, resilience and the ability to overcome harsh moments.

An Opportunity That Couldn’t Be Missed

In 2009 and almost four years since becoming a mother, I wondered if I would ever go back to work in my field of choice. After all, my work would take me again to far and sometimes complicated destinations. I was not happy professionally where I was at the time, but I was almost resigned to this life.

I was having one of those days when the phone rang and on the other side was a voice claiming to be from the Portuguese Ministry of Foreign Affairs. He stated that he had been trying to talk to me for a few days.

I did not hear anything. Wait, what? ‘We need to know if you are available for the electoral observation mission in Afghanistan. If so, you have a week to prepare!’ (Pause, I needed a pause!) ‘Yes!’ I answered without thinking it quite through ‘Very well, the European Commission will contact you today.’

After ending that call, my daughter who was almost four years old then came home from school. I watched her while she was playing and thought to myself what it meant accepting this challenge.

The risks involved in it, but also the benefits. I had to accept, I could not refuse because besides being a dream, financially it would also be great for both of us. But I would be in Afghanistan (of all places!) and away from her for two months. Two months!

Finally, after talking with my family and debating the pros and cons, I accepted.  I knew that in my absence my family would be there, with love for my daughter and for me.

Some days later, I left to do what I had to do. My heart shrunk, just one day after celebrating with her, her fourth birthday. I gave her a kiss,  I smelled her while she was sleeping and then off I went.

Only parents, who need to work away for long periods, know what these moments entail. And I can tell you, it is nothing short of amounts of love and pain.

For five days I had, with other colleagues, a long detailed security training. I saw and reviewed images of war, learnt about roadside bombs, kidnappings, what is a proof of life, etc and I questioned myself, ‘where the hell did I put myself into? What was I thinking? ‘.

The group was excited and quite accustomed to these wanderings. They were never condescending with this mother, who had just now joined the group. After all, before becoming a mother I had already some international experience, particularly in the Middle East.

When in Kabul, I found myself on a jeep on the way to the hotel surrounded by more jeeps full of policemen and a ‘carnival’ that I had only seen related to state figures. I confess, I was scared to my core.

When at the Intercontinental hotel, in a decadent environment similar to the ones seen in movies about Vietnam, I opened the window and the dusty curtains it revealed a monochrome city full of dust. A series of American helicopters flew above the hotel. I was in a war zone. What the hell was I doing there ?? I cried.

Strange as it may seem, Afghanistan turned out to be a surprise for me. In Herat, I discovered an Afghanistan with good people, an ancient culture, intense smells, but also extreme poverty and sharp inequalities.

I found strong and resilient women, some single mothers or widows who now (in 2009) were provincial candidates. Some of these were threatened daily. I survived, with my colleagues, a rocket attack on the base of the United Nations where I was based. I also survived a bomb threat at a home of a member of the electoral commission.

From that moment on, this has been our life. Doing international consultancies which have often led me away from home. I work regularly with the EU or the UN on projects regarding human rights and democratic processes, and I really love what I do. From time to time. Sometimes, my better half, my daughter, comes with me too.

Embracing projects which take me away from my daughter, because I made the decision above all, to guarantee that my daughter would never lack anything to have a healthy and happy life.

A decision that many mothers have taken in recent years for professional reasons, such are the needs of families these days, especially of single parents.

But above all, I would teach her by example, that one woman is capable of anything, as long as we put our commitment and heart into it.

Me and my daughter, we have an amniotic relationship dominated by love and complicity. Decisions are taken by the two of us, and we talk about everything honestly without infantilizing reality. It’s not easy being away from those we love the most. But the way we offset this absence is essentially made of real times spent together. Real moments which are not picture perfect, but unique.

For years, many people questioned this life choice of mine. As if I, and other mothers like me, are eccentric, or just ‘crazy’ just because our lifestyle is different.

The truth is that at 11 years old, Francisca has many unique qualities for her age. Empathy and understanding for the things of life, she sees the difference in the other naturally and embraces the new. She knows that nothing falls from the sky, and that now, right now in South Sudan, there is a conflict that many call a slow genocide.

It has a generous culture above average… and yes she knows what a genocide is. She also knows that life is sometimes strange, but that we must see things always on the positive side.

And in the end, we are together, and we are enough.

Sometimes, I do feel some guilt. Because I love what I do and I’m away many times following my own dream. I never felt pushed, well, perhaps initially. And on the agenda, are never projects longer than two months and ones where I may be able to take my daughter with me. It has happened a few times and now she has seen some of this world.

However, for the long-term it is more difficult because over time I became good at what I do in risky countries. Good adaptation to stress blah, blah, blah. Result: I get calls to join situations where I cannot take my small family with me. It is not easy and sometimes I get fed up and say: Enough! … I want to be with her ALL THE TIME and I want her to see the world with me!

But field work calls often … and when I’m in countries in Africa, for example, the colour of the land, the smells, the smiles, the adrenaline are consuming  … but it’s her, that beautiful little person who is my highest calling. For her, I do everything, and I am everything.

Even if sometimes I have to get away for a little bit … on the other hand, when I’m with Francisca, I’m 100% there. My daughter looks at me and hopefully sees someone who is a person that is not shy with challenges nor is defined by labels. If I am her nearest example, albeit not being perfect, I want to be the best I can.

Do you have an inspirational story? We love sharing amazing stories like Sónia’s to inspire others to make a difference while traveling. Get in touch to share yours.

2 thoughts on “All for my daughter: A Single Mothers journey to discovering herself.”