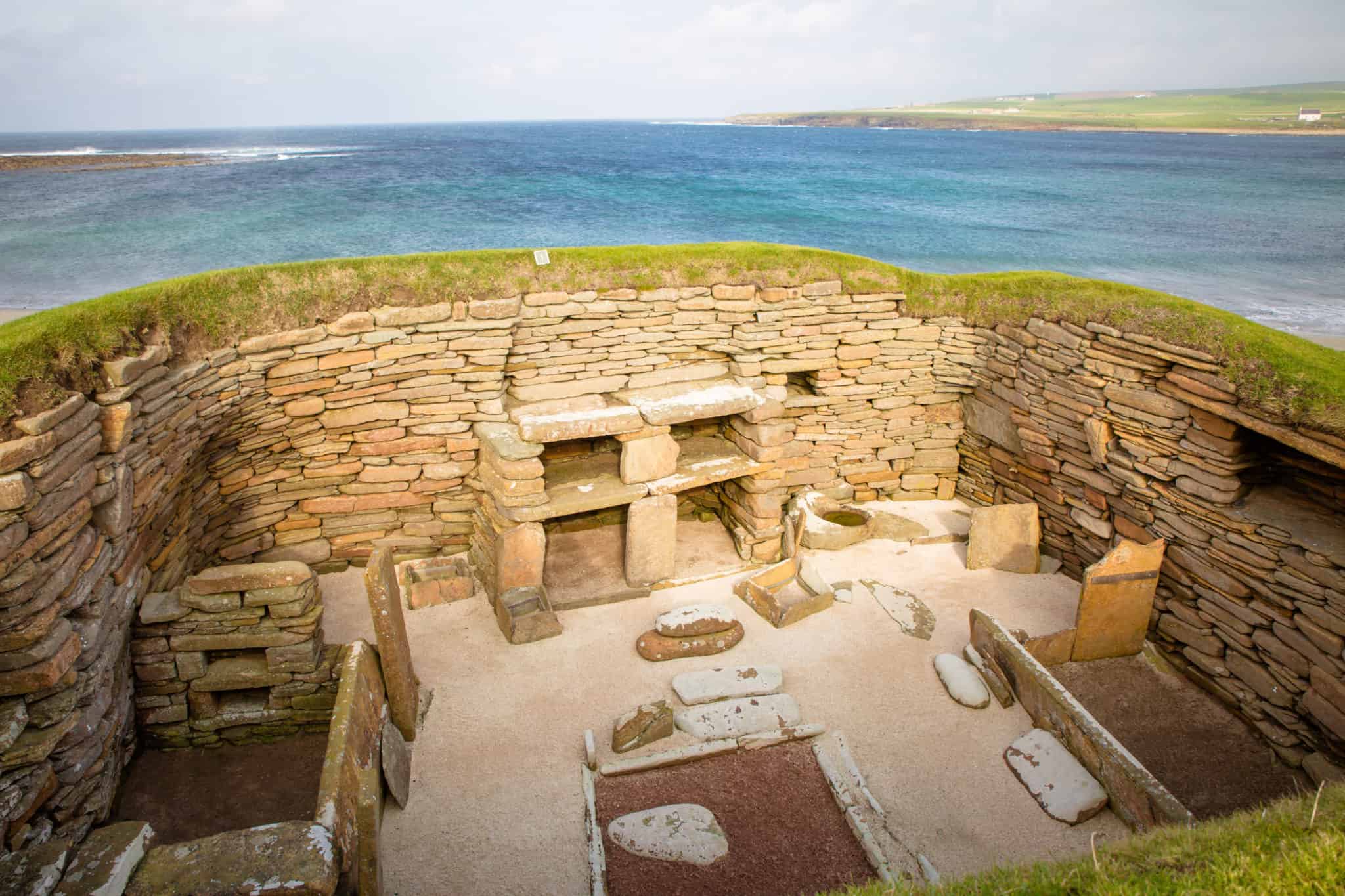 From mythical creatures dwelling in Loch Ness to the Fairy Glens of Skye, Scotland is a country with a rich history of folk tales. We found out that discovering the real history of Skara Brae, Scotland is just as magically!

Visit the Orkney Islands and step back in time to when Neolithic people roamed these wild Islands of Scotland.

Where are the Orkney Islands

Only a short distance north from the coast of Scotland, The Orkney Islands are visible from the mainland on a clear day (yes those are possible in Scotland).

Despite their close proximity to Scotland, these islands have a distinct taste of the exotic.

Maybe it’s the fact that until 1472 they were part of the Norwegian kingdom ( even the name Orkney is Norwegian, coming from Orkneyjar which means “Seal Islands”) or maybe it’s that archaeologists believe many more ancient sites lay undiscovered, waiting to tell the tale of life 5000 years ago. 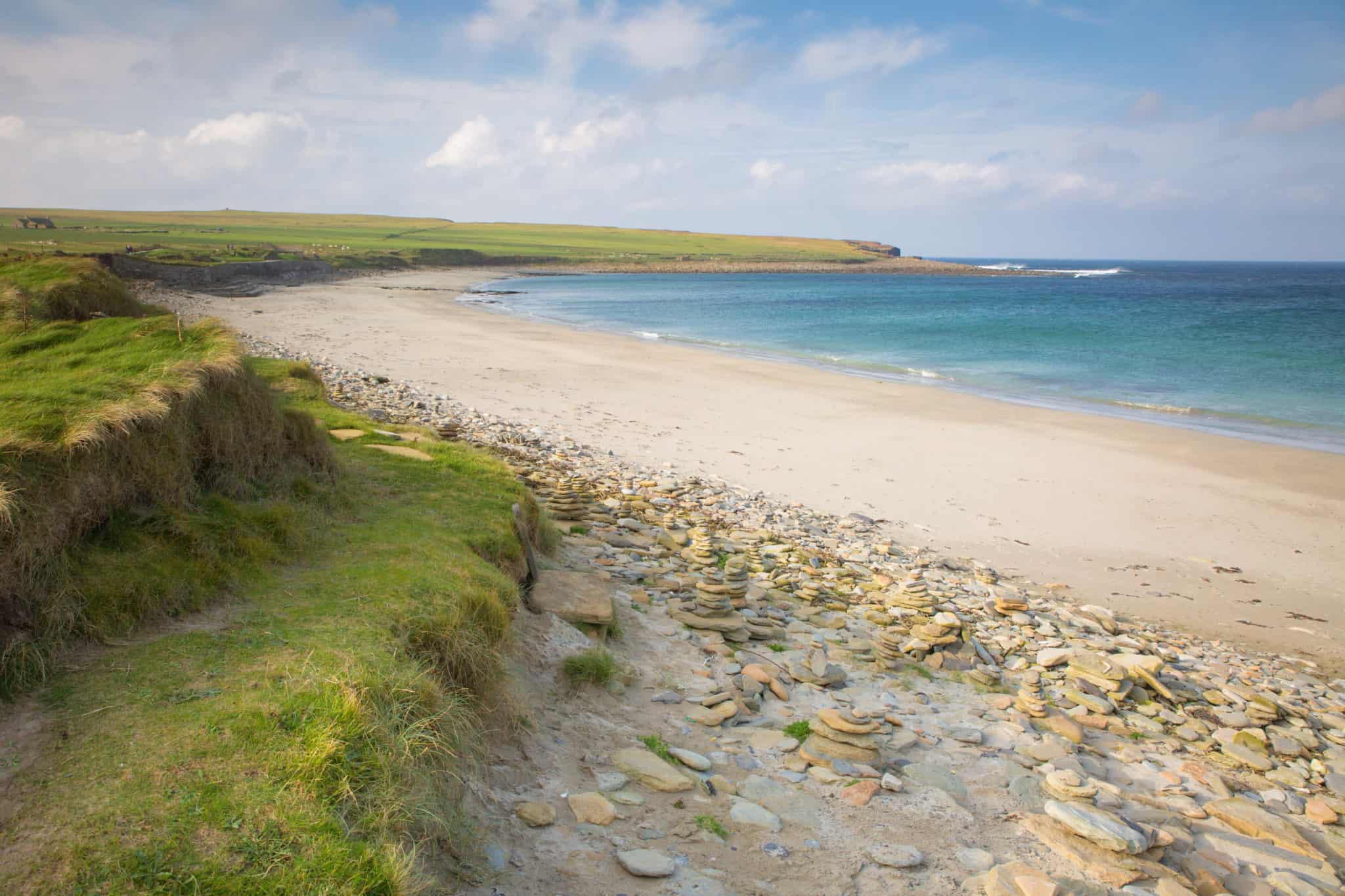 Where is Skara Brae?

Skara Brae is located on the largest island of the Orkneys, Mainland. The Skara Brae village is around 30km north west from the capital, Kirkwall on the Bay of Skaill.

Why is Skara Brae famous?

As you walk amongst a world that hardly looks much different from an episode of the Flintstones, Skara Brae brings to life a human past that can be sometimes hard to grasp.

How old is Skara Brae?

When Skara Brae was first discovered it was thought to be an Iron Age settlement, around 3000 years old. Through later testing, they found out that rather than a Pictish village it was in fact late Neolithic which dates it at around 3200BC to 2200BC.

How long ago was Skara Brae built?

Skara Bare was built 5000 years ago! That’s a few hundred years before Stonehenge was built and even before the Egyptian Pyramids.

The buildings have been built into midden ( which is basically a big collection of everyday human created rubbish that has been compacted down into a tough material! ) and the homes are made up of stone.

What is special about Skara Brae?

The fact that this Neolithic village is so old is not all that makes it special.

What makes Skara Brae unique is how well it is preserved.

Because the area was largely covered by sand for thousands of years it means the buildings and even their contents were protected from erosion and damage. This means that we can catch a rare glimpse into how people really lived during these times. Something that you don’t get to see in many other parts of the world.

Neolithic is the end of the stone age, and is sometimes called the “New Stone Age”.

It is the time in human history where crop growing and keeping cattle overtook hunting and gathering.

This meant that people started to build more permanent homes, just like Skara Brae. Although the area looks pretty barren now, 5000 years ago it was much further inland and surrounded by fertile land.

It was also a couple of degrees warmer than what you will experience when you visit.

During excavations, they have found evidence of cattle such as sheep as well as seed grains showing that wheat and barley were grown in the area. This means they were amongst some of Britains first farmers.

How was Skara Brae discovered by archaeologists?

A site known locally as Skerrabra hid a secret, forgotten until a severe storm hit the area in 1850. Destructive winds and extreme tides removed layers of earth from a great mound.

In its wake, some of the buildings you can see today on the site now known as Skara Brae were revealed.

A local laird called William Watt was the first to start excavation the area. Unfortunately, not only did they cause some damage to the area while excavating but they then left it abandoned for 60 years afterward.

This meant the area was further damaged by bad weather and the elements. 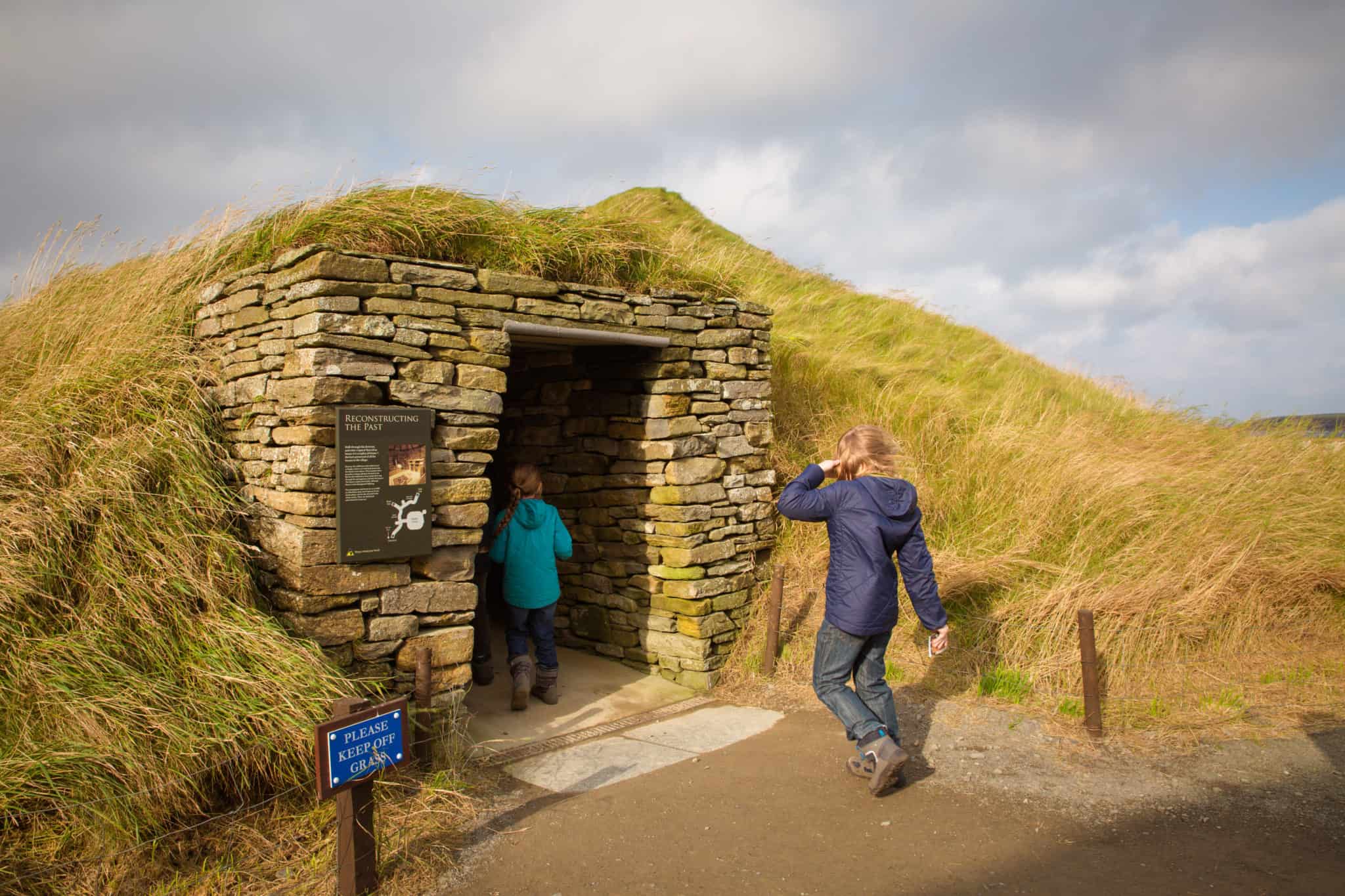 There are 8 houses joined together like a rabbit warren. These low and covered passageways between the houses would have offered protection against the harsh weather of the area.  As you walk along the modern pathways, site officials warn you to hold on to the children so they’re not blown off the walkway.  It’s easy to see how vital this design was to living in these conditions. 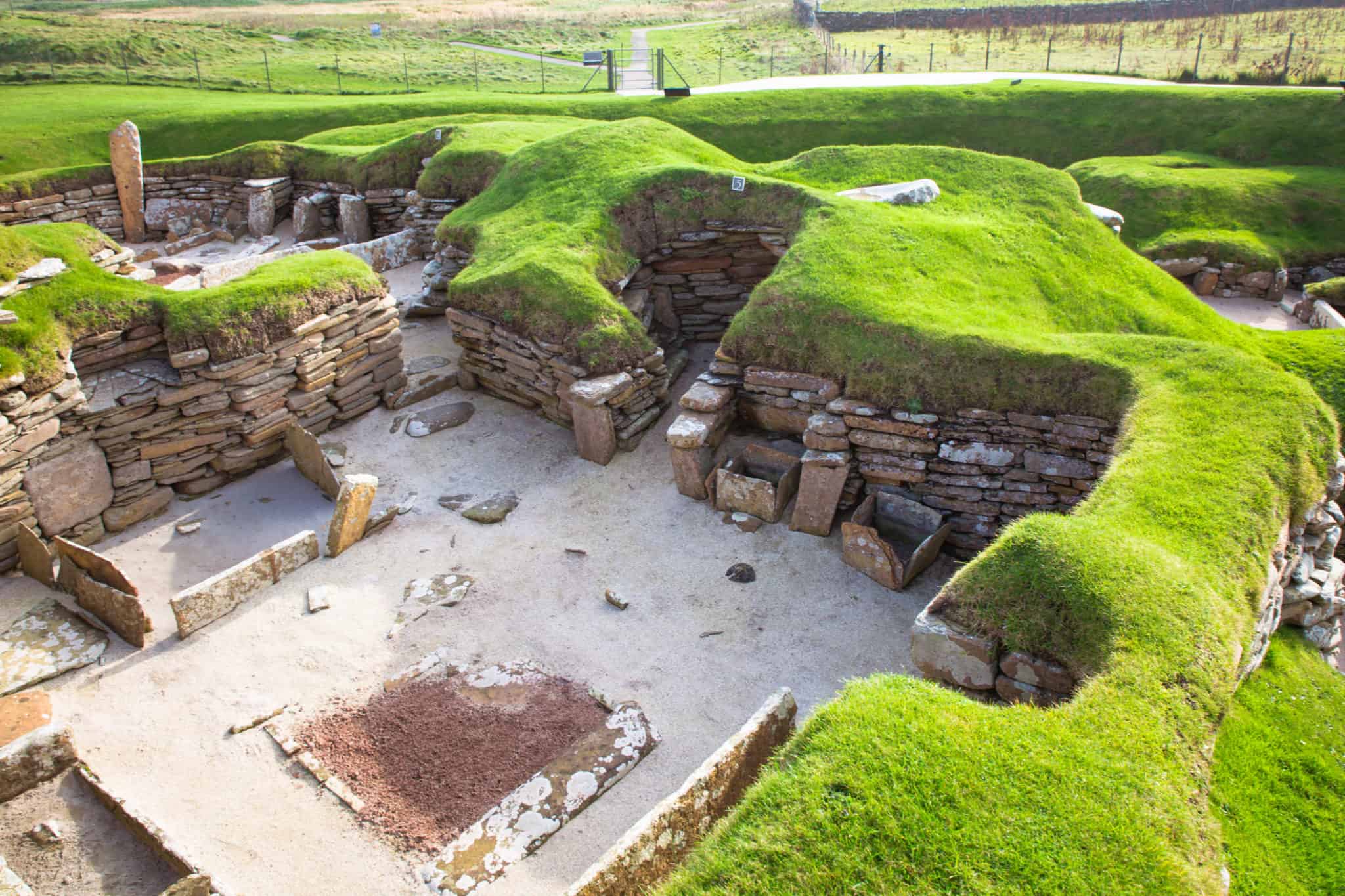 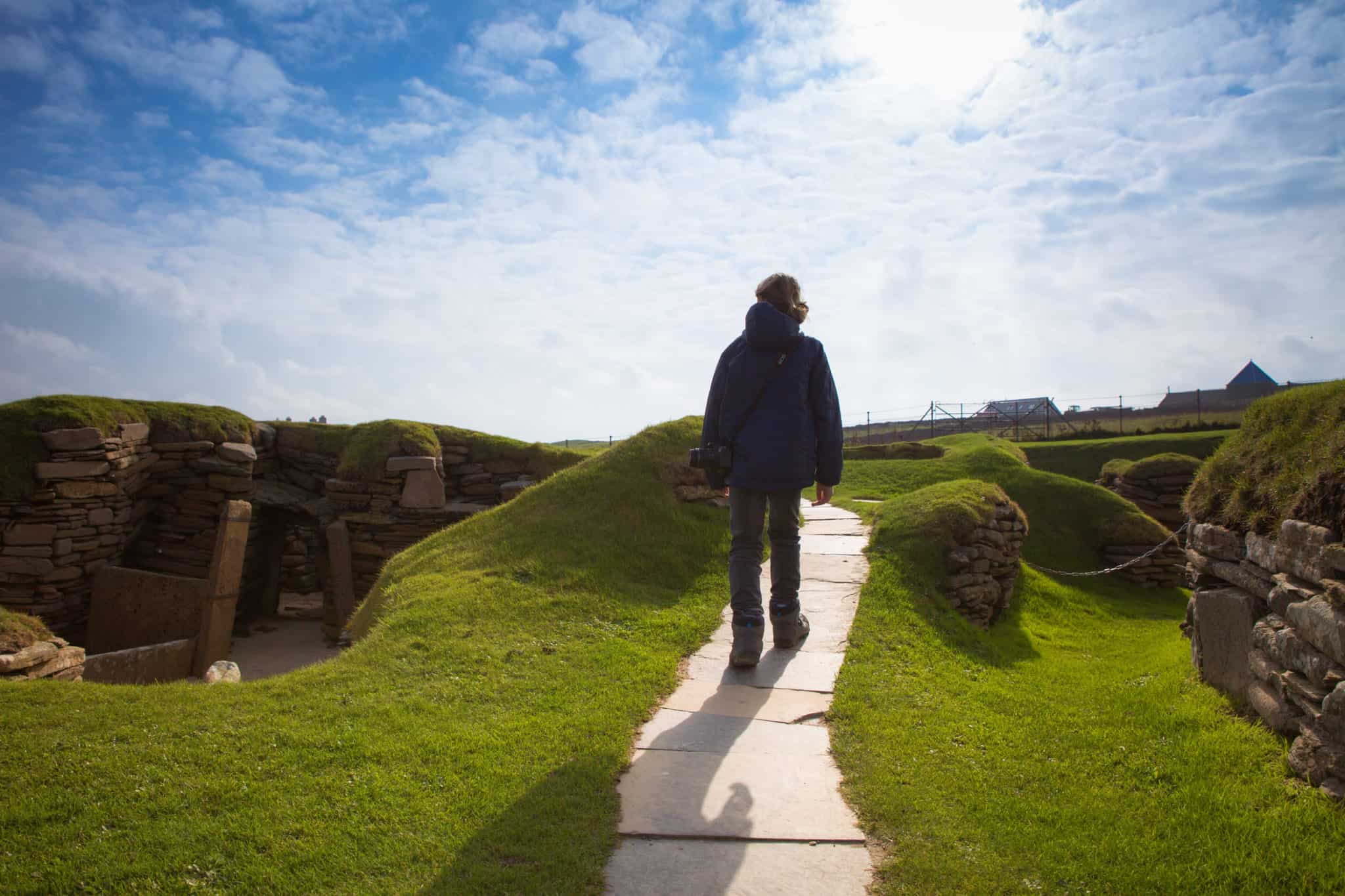 Most of the Skara Brae houses have a similar layout. And if you are wondering did Skara Brae have any furniture? Then, amazingly, yes!

A huge stone dresser is the focal point of the square room as you enter. To either side is a bed box made from slabs of stone ( some of these even have undeciphered carvings).  There are even stone doors and a primitive toilet with a drainage system. 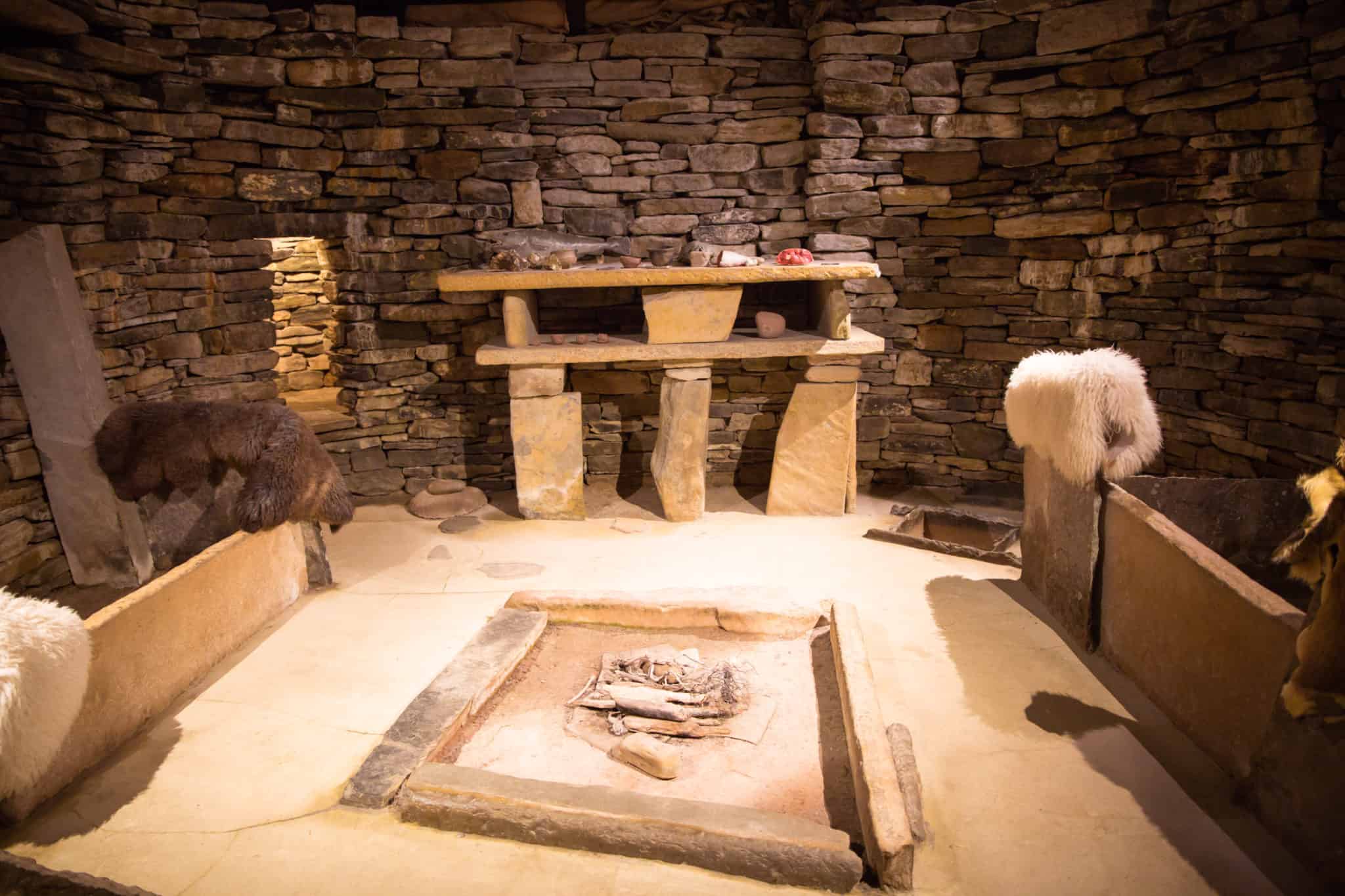 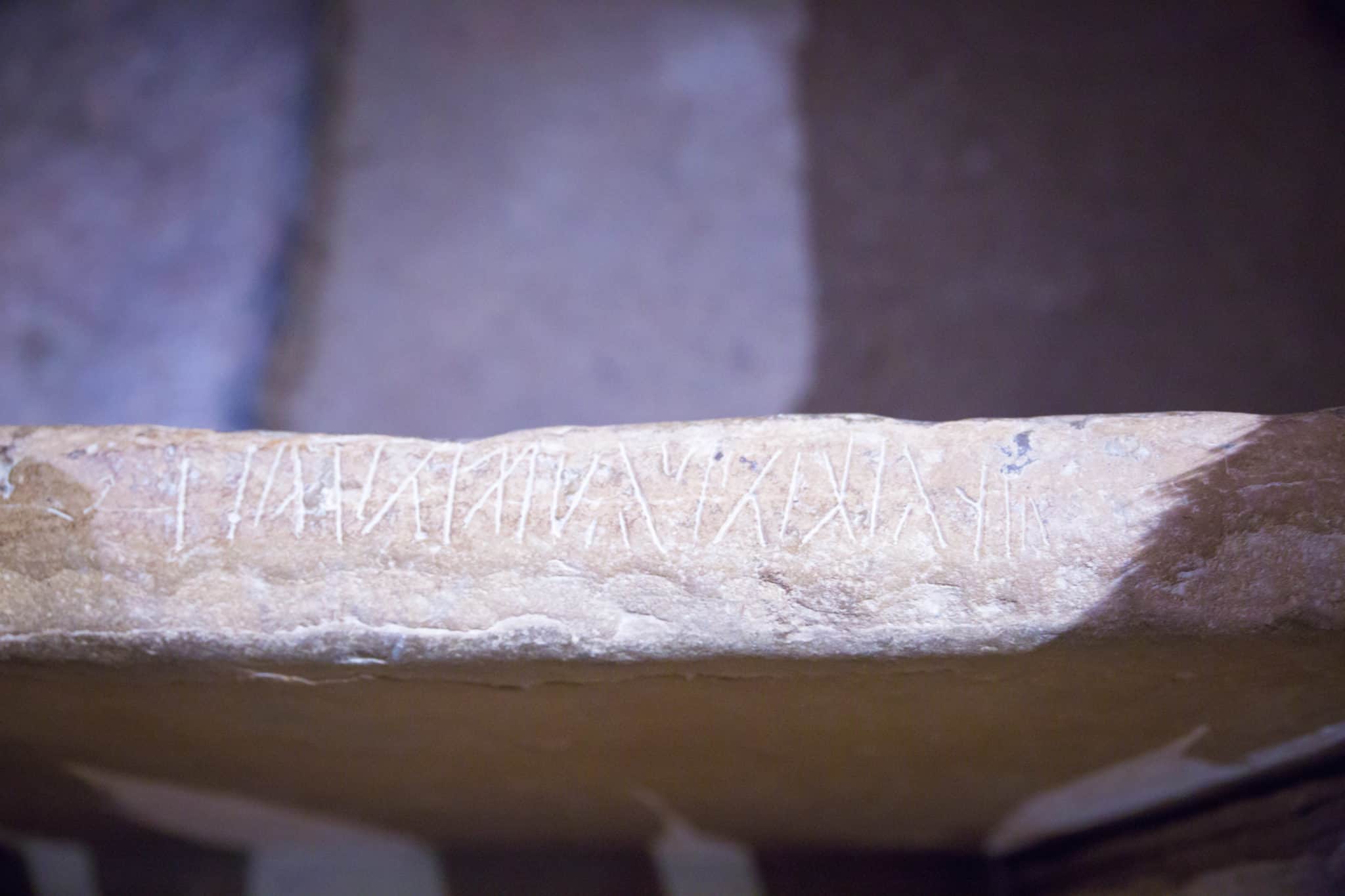 The replica house allows you to travel back in time as you duck inside the low doorway. Although basic, surprisingly, it looks familiar and comfortable to us 5000 years later. 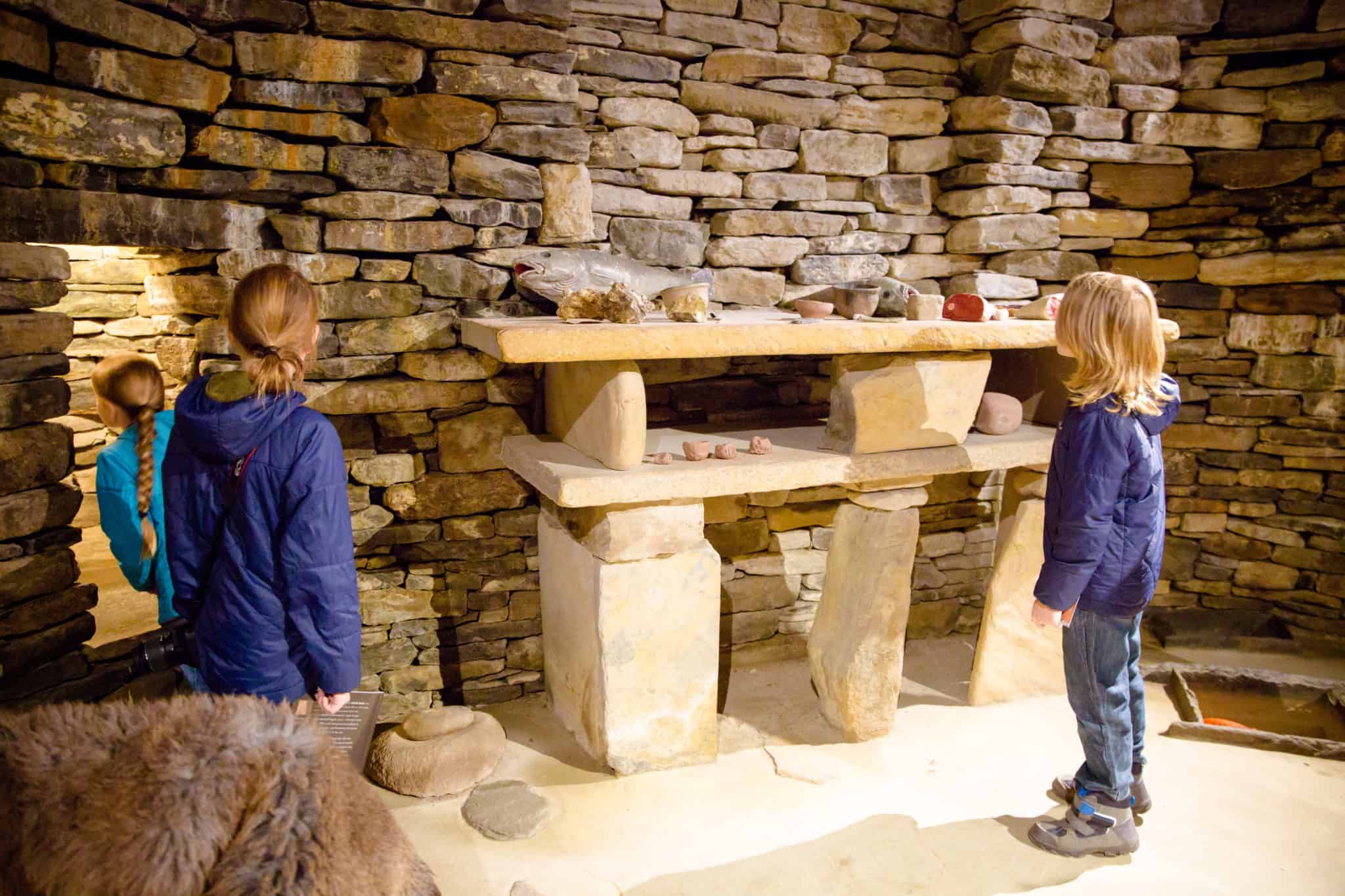 Visiting Scotland? Click here to see why you need to visit the stunning Isle of Skye.

Staring at a stone dresser which wouldn’t look too out of place in a fancy modern home it is easy to picture someone placing their loved possessions on display.

It’s harder to imagine the vastness of time however and that someone probably did just this, 500 years before the Great Pyramids began to be built.

At the Skara Brae visitor centre, you can see so many amazing items like dice, pottery, and jewelry which have been found on the site over the years. Objects that can probably be found in your own home right now. 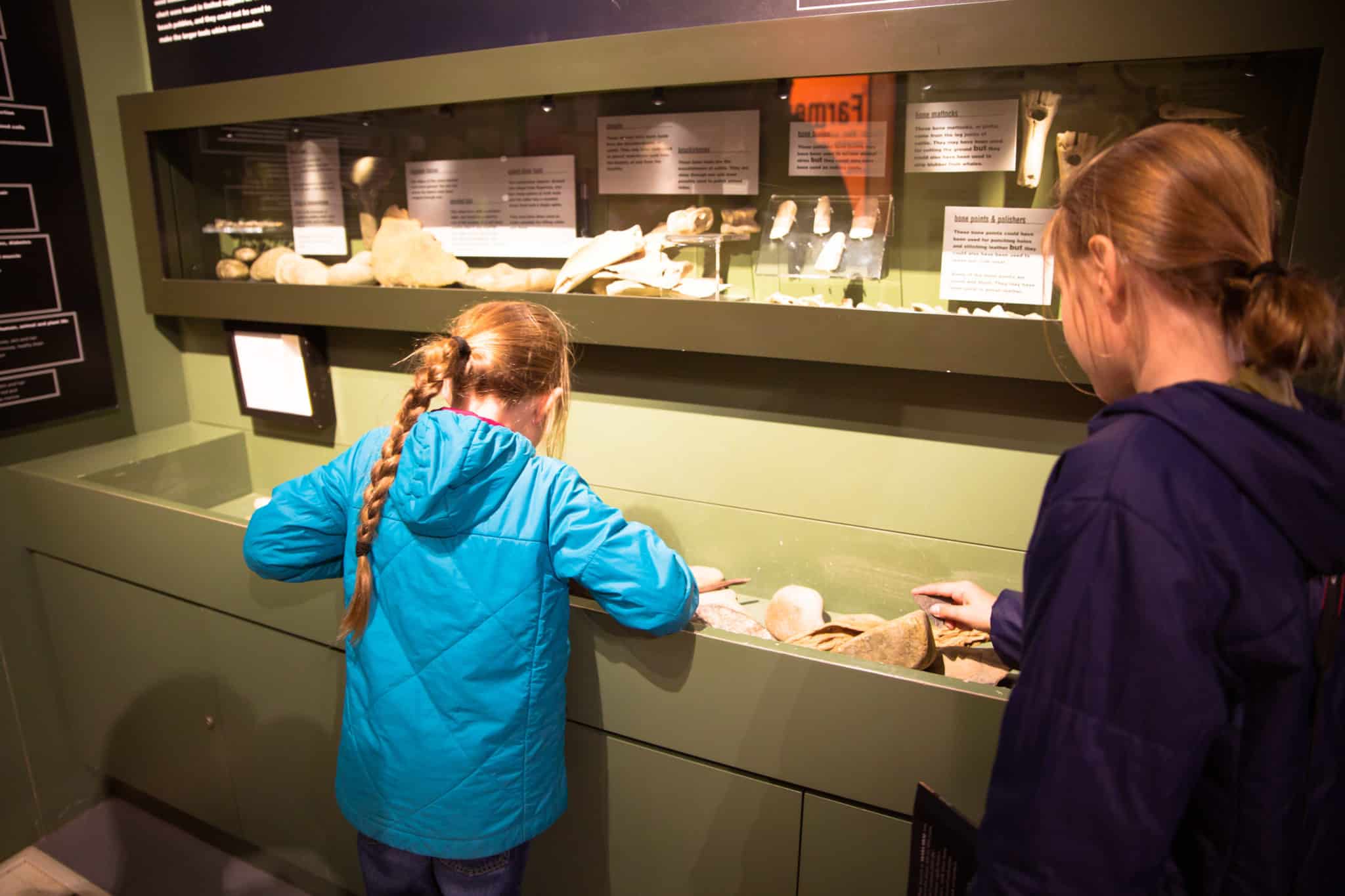 A point I particularly loved was that this village was in an open area (much further back from the sea than now) and no weapons have been found on the site.

It seems that the people that had time to create such beautiful objects of leisure or not have to worry about self-defense led a pretty peaceful life.

One of our favorite things at Skara Brae were the perfectly carved stone balls that were found at the site.

You can spot some in the visitor’s centre before heading out to see the houses.

No-one knows what these were for but it is fun to guess what they could have meant to the people who spent long hours creating them.  Seeing the intricate and near-perfect designs, it can be hard to picture how these were made in a time when the only tools available were made of stone or animal bone. 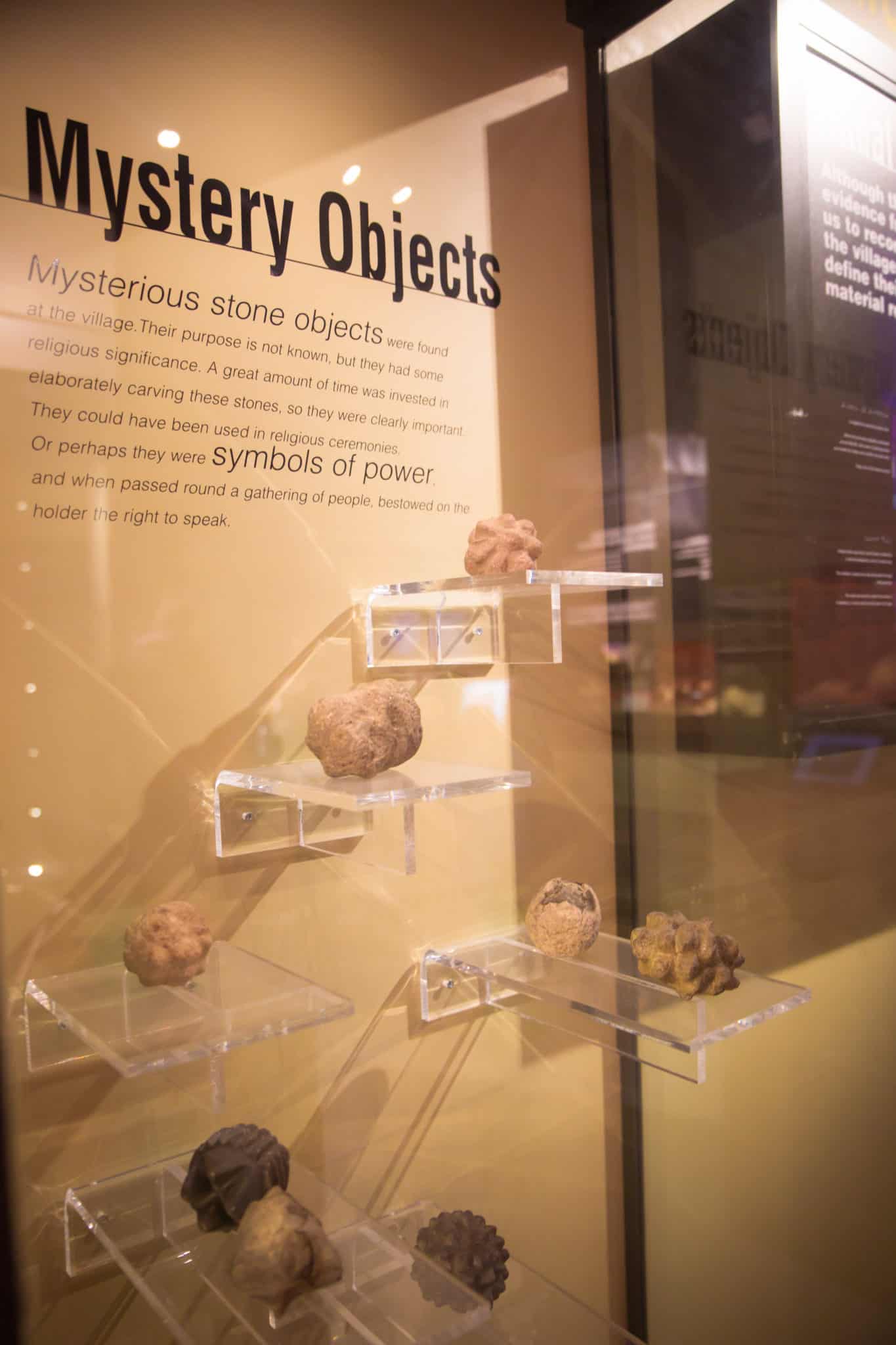 Inside the homes are mysteries too, like the small storage places created from stone. Maybe these were to store freshly caught fish or even to hold bait? We loved using our imaginations to come up with how these could have been part of life so long ago.

What happened to Skara Brae?

Perhaps the biggest mystery is why, after 600 years of people making Skara Brae their home, they left?

When was Skara Brae abandoned?

Skara Brae was abandoned around 2500 BC.

There are a few theories as to why but no one really knows.

Some people think as the Bronze Age started to come and society changed, youths moved from the communal living to more individual type homes further inland.

Another theory is that the weather, moving sand and harsh conditions made farming and living there difficult and the village was slowly abandoned.

Walking in the area on a wild Scottish day, it is easy to see how this could have happened. 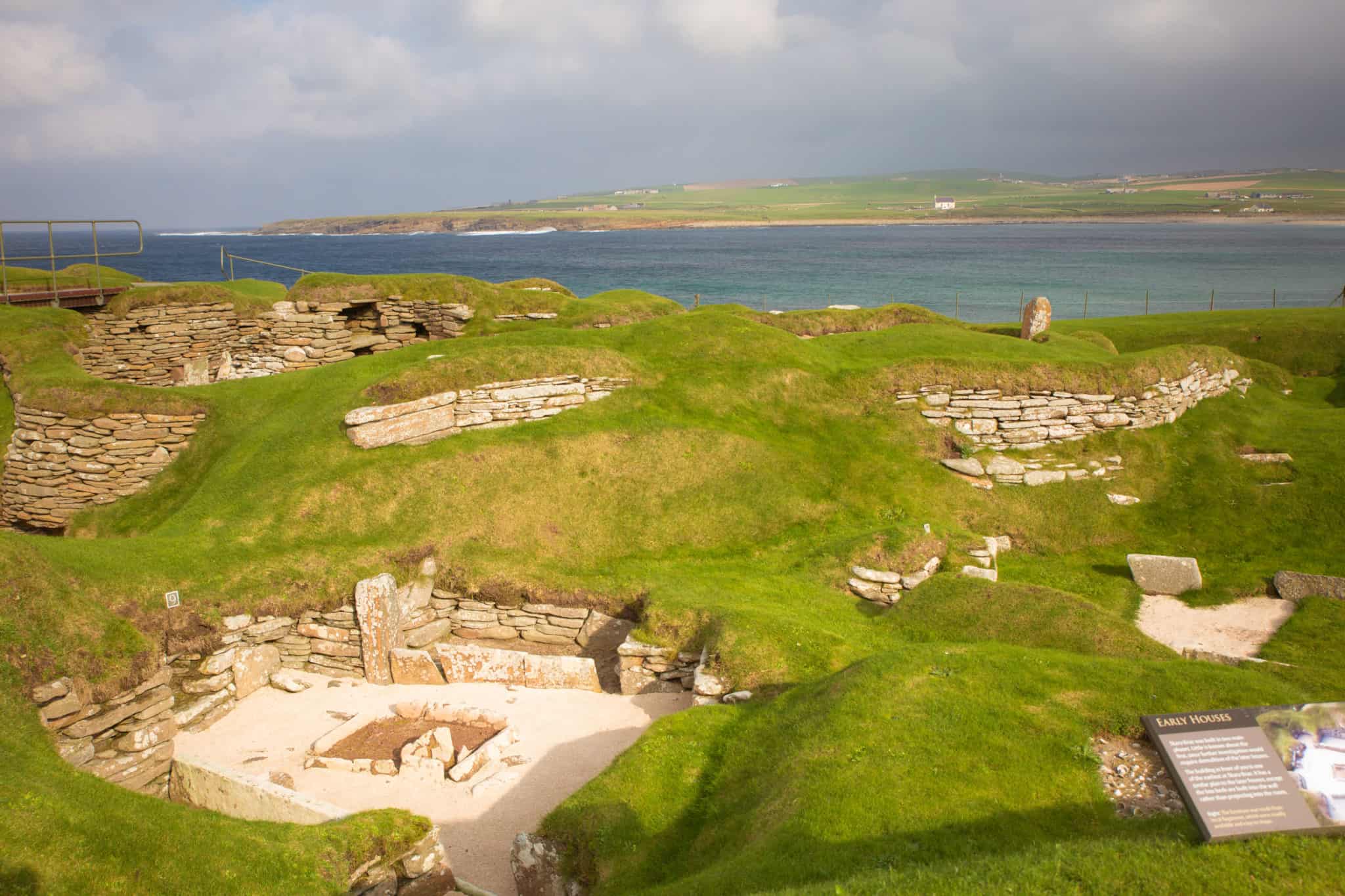 If you love history you may like this Skara Brae video.

How to get to Skara Brae

You can get to the Orkney Islands by regular Ferry from mainland Scotland. Find times and dates here.

The crossing was pretty rough when we went so if you suffer from sea sickness you may want some travel sickness tablets or plenty of ginger tea!

The easiest way to get around is to hire a car.

Skara Brae is in Stromness which is about half an hours drive from Kirkwall.

There is also a bus from Kirkwall to Skara Brae which takes around an hour. Find the Orkney Bus timetable here for up to date times.

How Much Is Skara Brae?

There is an entrance fee to visit Skara Brae. You can check season prices and buy Skara Brae tickets online here.

If you are planning on visiting a few historical sites during your time in Scotland it may be worth looking at the Explorer Pass. Find more details here.

What To See In The Orkney Islands

There is so much to see in the Orkney Islands.

Click to read a great one-day itinerary for Orkney that fits in so many of the islands interesting must-see destinations.

Just near Skara Brae is Skaill House which is part of the Skara Brae entrance fee for some of the year.

Some of our favorite sites around the rest of the islands were the 5000-year-old ancient tomb of Maeshowe ( that comes with its own famous Viking graffiti) and the standing stones, The Ring of Brodgar and Stenness.

More to come on these fascinating places within the Heart of Neolithic Orkney UNESCO World Heritage Site on Travel With Meraki soon but for now, head here for some great information or check out some books here. 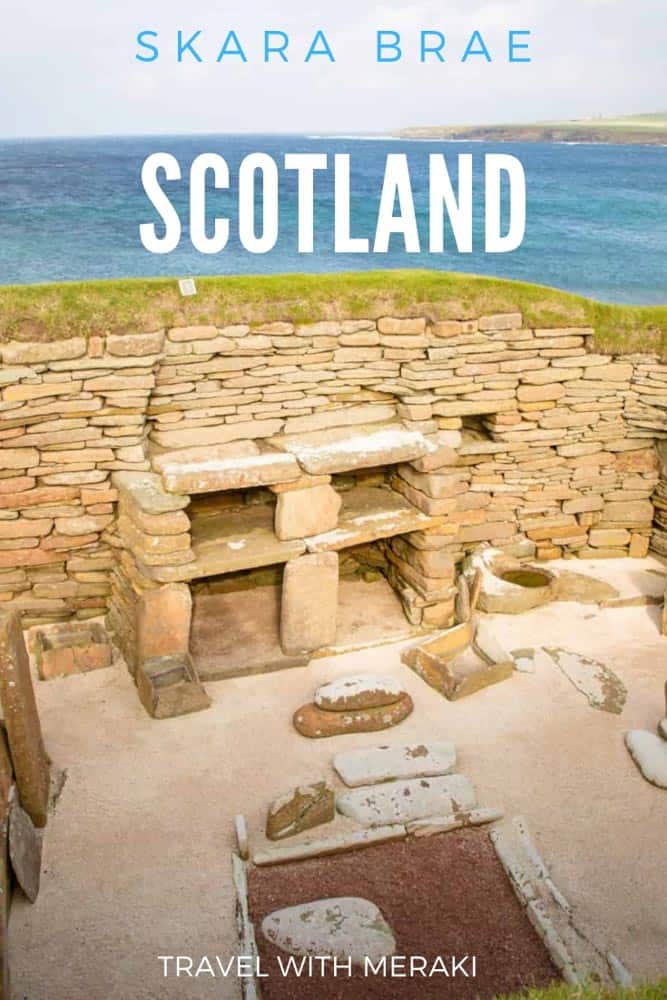 Have you been to the Orkney Islands of Scotland and visited Skara Brae?

2 thoughts on “Adventure back in time 5000-years in Skara Brae, Scotland”